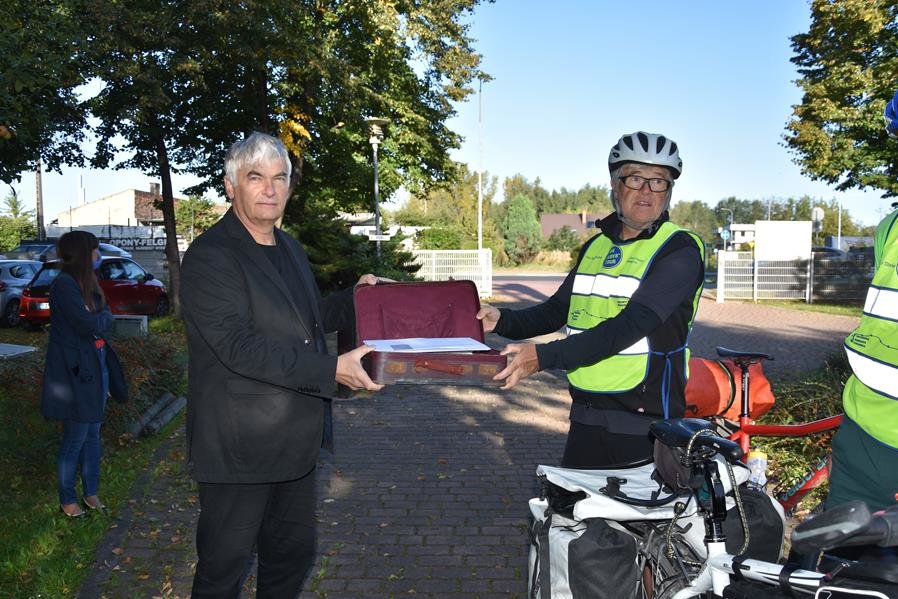 An extraordinary ceremony was held at the IYMC on September 18 2020. Martin Krick, a 69-year-old man from Allgäu, Bavaria, who cycled the 1,300-kilometre route to Oswiecim in 12 days, handed over an old children's suitcase containing items commemorating people who were murdered in Auschwitz just because they were Jews to Director Leszek Szuster. The impulse for this extraordinary journey was the story of a 5-year-old Jewish woman, Gabriele Schwarz, murdered in 1943.

Martin Krick set off on a bicycle trip on 6 September 2020. The expedition started in Stiefenhofen in Bavarian Allgäu, where Gabi grew up. He met many people on the way, to whom he told the story of Gabi, in order to remind them of the lawlessness and crime, which took place over 70 years ago. As he stressed, it was of great importance for him to complete his journey in our House, since our work of commemoration and reconciliation earned his recognition. For this reason, he conducted a collection for the IYMC during the meetings along the way and passed the results on to our institution for further educational work, especially with young people who will take on the role and tasks of witnesses to history in the future.

We are extremely grateful for this initiative and express our deep thanks to all the donors!

Gabriele Schwarz was born on 24 May 1937 in Marktoberdorf. Her mother, Lotte Eckart, née Schwarz, came from a Jewish family living in Augsburg. Her father - probably of non-Jewish origin - remains unknown to this day. To protect her daughter from Nazi persecution, Lotte gave Gabi to the care of a friendly 'Aryan' family, Aichele of Stiefenhofen. Gabi was surrounded by love by her foster family and enjoyed a happy childhood. The baptism of Cardinal Faulhaber of Munich was to provide additional security for the mother and daughter. However, according to the racial laws adopted in the Third Reich in 1935, Gabi and her mother were considered to be of Jewish origin. In 1941, Lotte was arrested and murdered. On 12 February 1943, in accordance with an order from the Gestapo and the Starost of Stiefenhofen, Gabi was taken away from her foster family and taken to a Jewish hostel in Berg am Laim, Munich. The efforts of her adoptive parents and her older sister Anna to prevent Gabi from being taken away from them have been unsuccessful. Her parents packed her small suitcase. It contained warm clothes, a mug, plates, spoons, toys and a farewell photo of the whole family. Josef Aichele, her foster father, wrote on the back: "In memory of Mum and Dad, Anna and Resi. Aichele, Josef, Stiefenhofen." Three days later, the adoptive parents received Gabi's suitcase back with concise commentary: "The Jews are forbidden to have anything that is owned by the "Aryans". Gabi did not stay long in Berg am Laim. On 12 March 1943 the Jewish hostel was closed down. On 16 March the train, on which Gabi was also in, reached Auschwitz. After selection on the ramp, together with all those considered unfit to work, Gabi ended up directly in the gas chamber.

Like many other Jewish children, Gabriele was the victim of racial hatred promoted by the Nazi state and of the decisions of opportunistic officials and their helpers, whose hands were not shaking even for a moment when they signed deportation orders. Today, each of us has a responsibility to oppose hatred and lawlessness. The history of Gabi reminds us to learn lessons from the past.

Based on the study by E. Pasternak